The Philippine automotive industry is showing signs of resiliency amid the challenges brought upon by the COVID-19 pandemic. Sales of brand-new cars during the first quarter (Q1) of 2021 indicate a glimmer of hope for the local automotive market as it registered better numbers compared to the same period last year.

In a joint report published by the Chamber of Automotive Manufacturers of the Philippines, Inc. (CAMPI) and Truck Manufacturers Association (TMA), Q1 2021 sales posted an 8.9 percent growth with 70,312 units sold. The said sales performance is more notable as compared to the 64,542 units sold in Q1 2020. 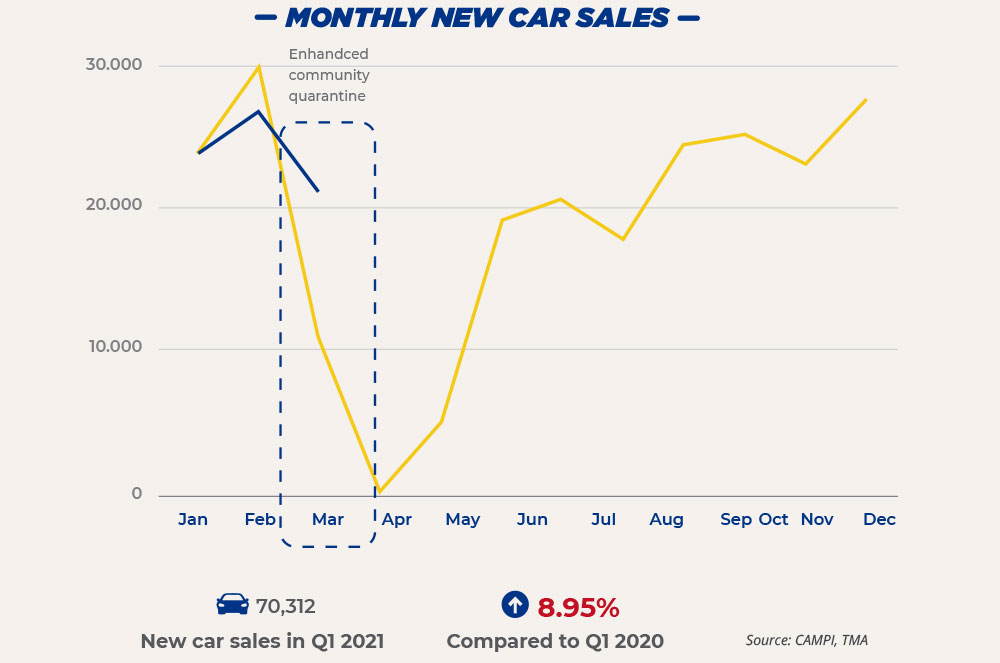 The better sales performance for the first three months of 2021 could be attributed to the implementation of a less strict community quarantine status. Last year, Metro Manila was placed under the Enhanced Community Quarantine (ECQ) in March that resulted in little economic movement, and low demand for new cars. The eruption of the Taal Volcano in January 2020 also contributed to the lackluster sales performance of brand-new cars in the Philippines.

Those were the factors that greatly impacted car sales in the local market, a trend that was seen in the following months as the country succumbed to the challenges brought upon by the pandemic. 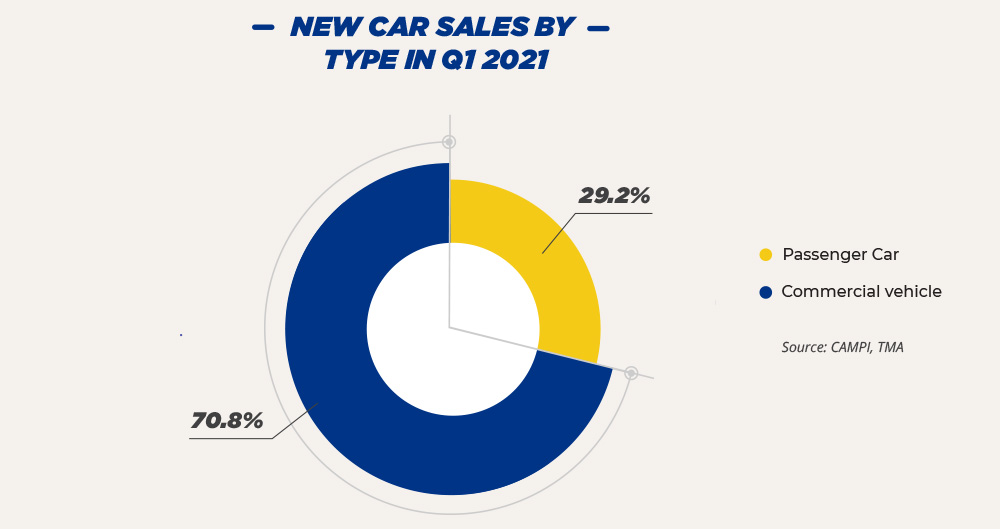 Toyota Motor Philippines (TMP) continues to be the top-selling car brand in the Philippines with 33,095 units sold in Q1 2021 as compared to the 25,696 units in Q1 2020. This equates to a 28.8 percent growth. Interestingly, not all car brands in the local market are registering sales growth in Q1 2021. It seems that TMP is one of the car brands that showed a positive sales performance in the first three months of the year despite the implementation of the safeguard duty.

Mitsubishi Motors Philippines Corporation (MMPC) sold 11,788 units in Q1 2021, which is 3.7 percent lower compared to its 12,235 units sold in the same period last year. Nissan Philippines Inc. (NPI) had the same fate as it posted 5,198 units sold in Q1 2021 versus 8,517 units last Q1 2020, which translates to a 39 percent decrease in sales. Nevertheless, MMPC and NPI clinched the second and third spots as the top-selling car brands in the Philippines in Q1 2021, respectively. 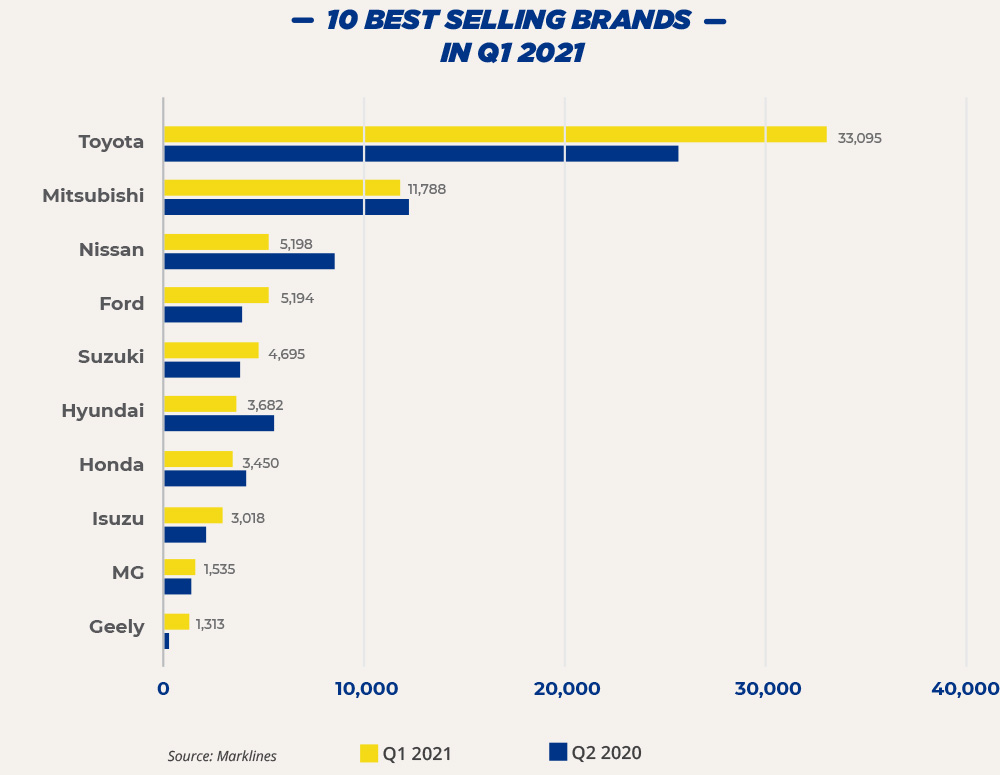 Geely Philippines is also one of the top performers in terms of new car sales in Q1 2021. The said Chinese car brand posted 1,313 units sold, which is a whopping 345 percent growth. The said sales performance was driven by the Coolray (57 percent) and the Okavango (40 percent). For reference, Geely PH sold 294 units in Q1 2020.

The coronavirus pandemic had a sudden surge in the Philippines specifically in the National Capital Region. This prompted the government to put Metro Manila, Bulacan, Cavite, Laguna, and Rizal back to ECQ, which lasted from March 29 to April 4, 2021. Staying at home is the best approach to stem the transmission of the COVID-19 virus. As such, shopping for cars online is still the safest way to prevent oneself from getting infected with the virus. 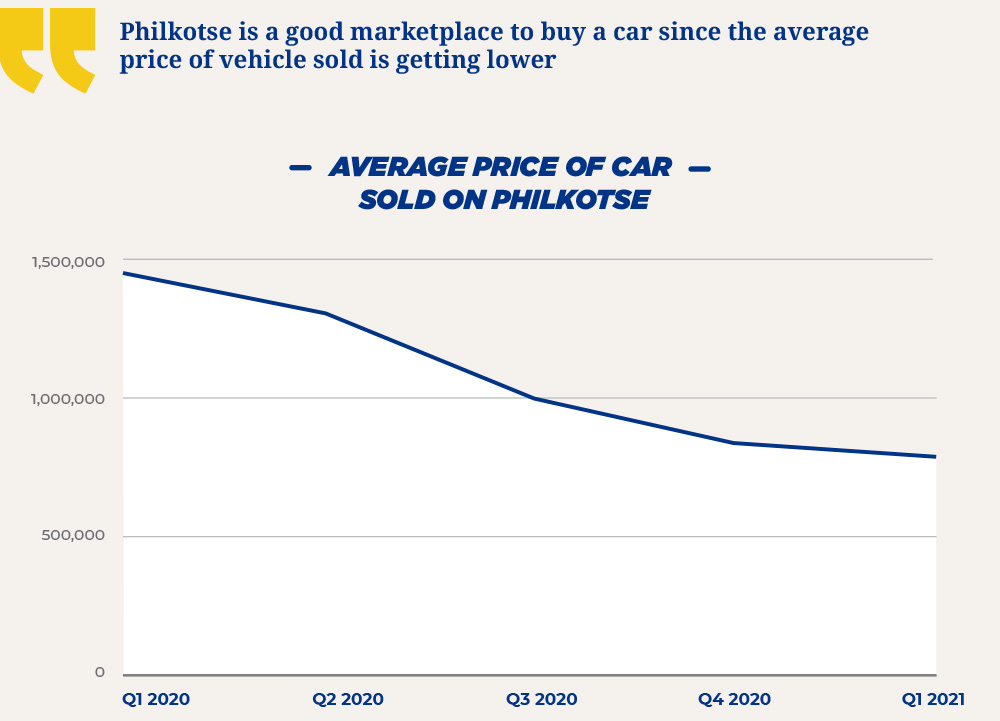 The most viewed or searched car on Philkotse in Q1 2021 is the Toyota Fortuner with more than 273,000 pageviews. The Fortuner is a seven-seater midsize SUV that goes up against the likes of the Mitsubishi Montero Sport, Ford Everest, Isuzu mu-X, among others. 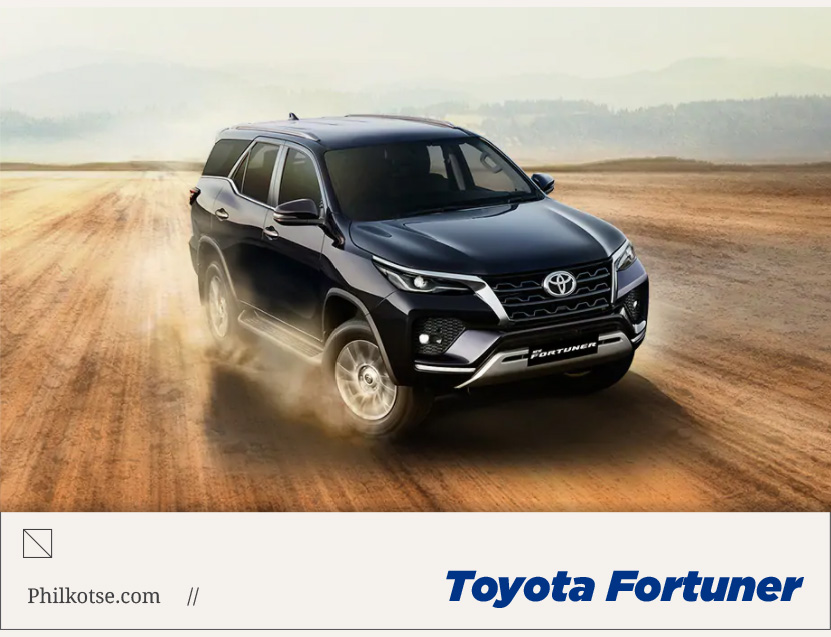 The second most viewed car on Philkotse is the Toyota Vios with more than 269,000 pageviews. The Vios is Toyota Philippines’ challenger in the local subcompact sedan segment. It managed to be the best-selling car in the country last year with more than 19,500 units sold. 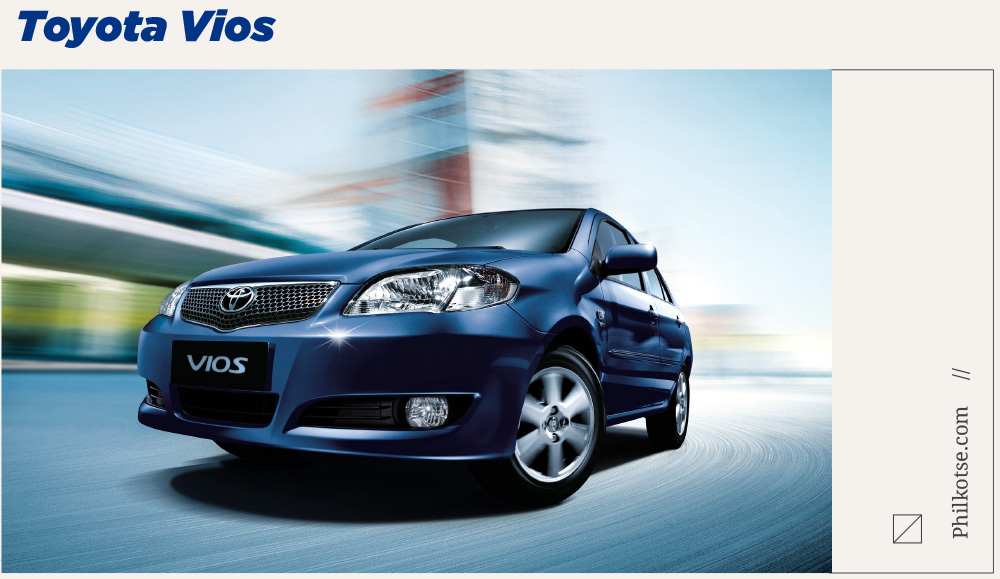 Clinching the third most viewed car on Philkotse is the Toyota Innova with more than 217,000 pageviews. The Innova is an MPV that competes against the likes of the Maxus G50, Geely Okavango, among others. 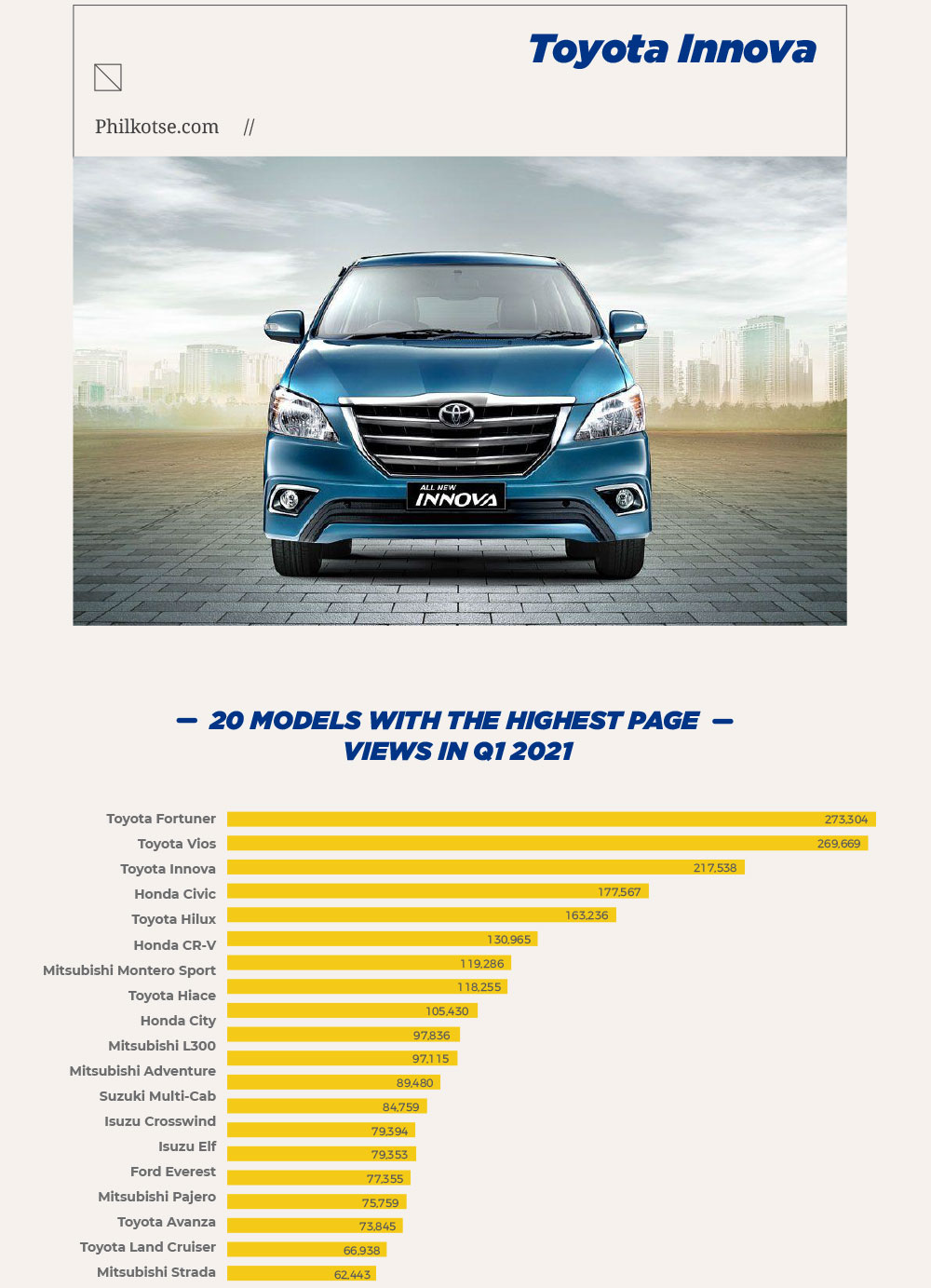 Based on Philkotse’s data, the three most viewed vehicles on the website in Q1 2021 came from Toyota. This is not surprising since Toyota is currently the best-selling brand in the Philippines. As such, Toyota can be considered as the most popular car brand in the local market.

After getting the YouTube Silver Button in December 2020, Philkotse’s subscription has been increasing rapidly with an average of over 10,000 subscriptions per month. This shows Philkotse’s commitment to producing video content that is geared to help car buyers have an informed decision before making an actual vehicle purchase. Through Philkotse’s several video categories such as Top List, Car Review, and Quick Look, potential car buyers can gain useful insights that will help them in the whole car buying process. 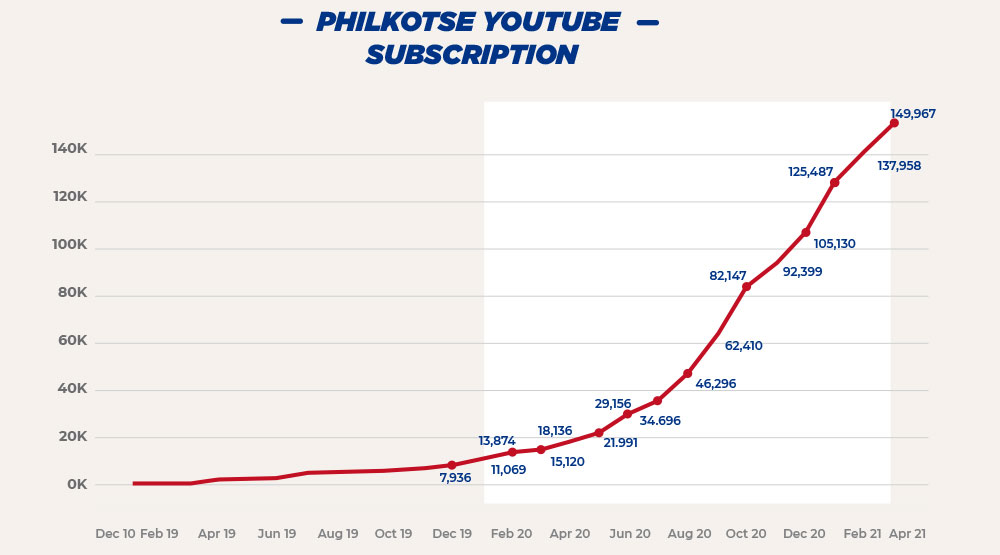