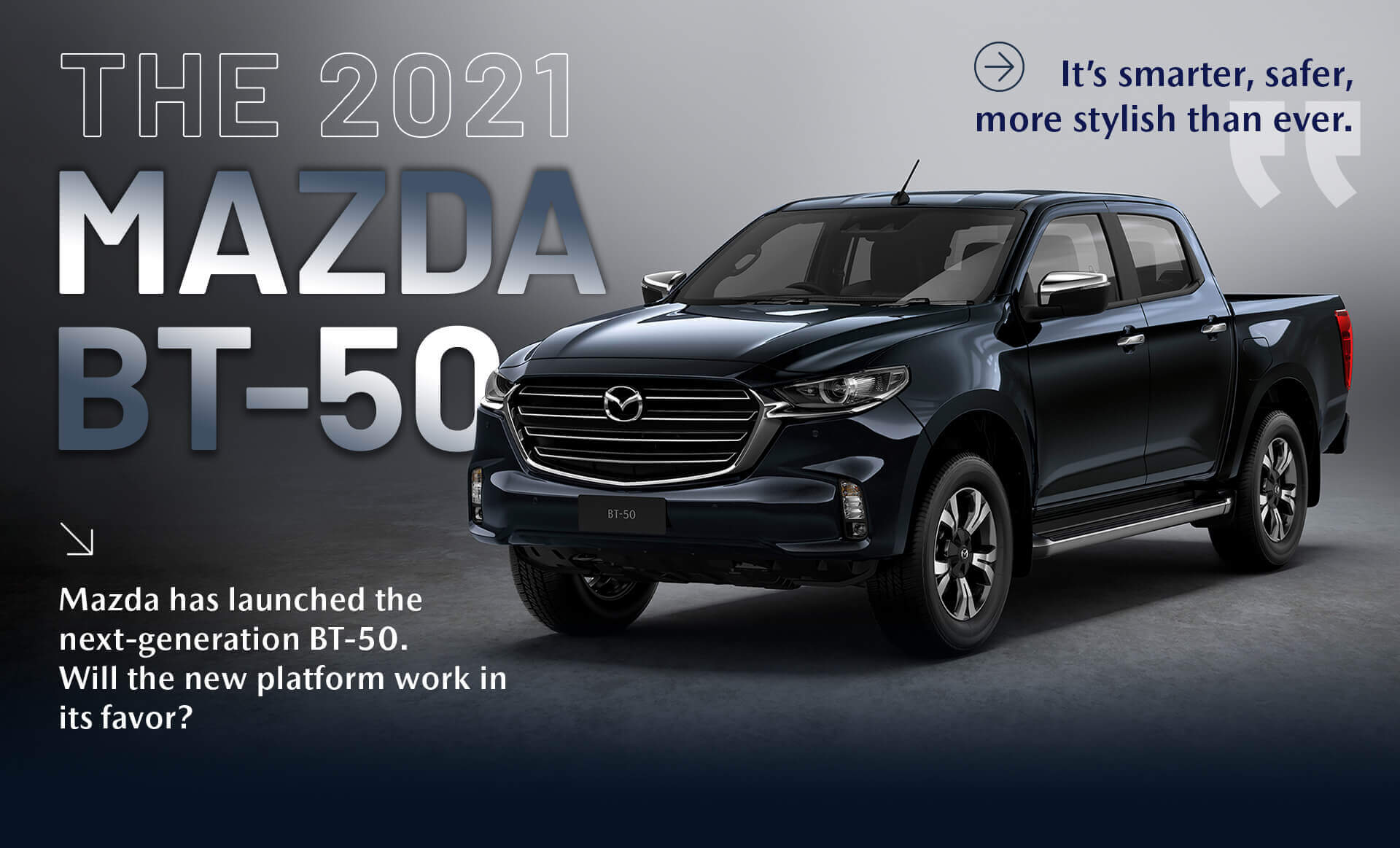 Time was when Mazda and Ford were in holy matrimony as far as cars were concerned. Among the models they shared for a variety of markets were the Mazda Bongo/Ford Econovan (eventually becoming the Ford Freda), Mazda 2/Ford Fiesta, and the Mazda BT-50/Ford Ranger. That last one was quite interesting, as the BT-50’s original Mazda chassis lasted only one generation before adopting the Ranger’s Ford-designed T6 platform.

The split came in 2016 when Ford sold off its remaining Mazda shares. On the one hand, it marked the Japanese carmaker’s comeback from collapse. The flip side is that Mazda then needed a new strategic partner for its pickup truck division, a role readily assumed by fellow Nippon marque Isuzu that sparked the possibility of a BT-50 and a D-Max sharing the same underpinnings.

Isuzu had first dibs on the union’s offspring when it released the next-generation D-Max in 2019. Now Mazda brings the second half of the equation by unveiling the new BT-50. Not only is it the first Mazda pickup in decades to have nothing in common with a Ford, but it’s also the first to bring the award-winning Kodo design language – to a truck. 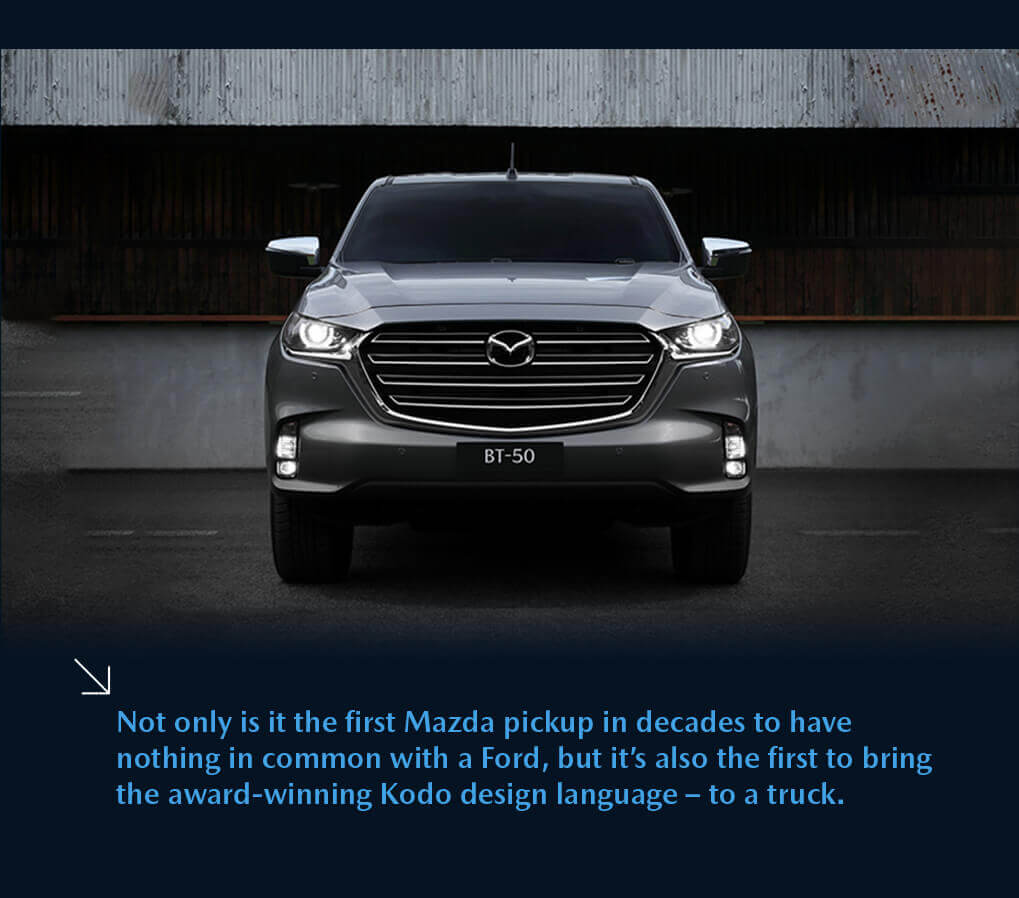 The look elicits a momentary pause, brought about by seeing an elegant aesthetic commonly associated with sedans and crossovers now gracing a workhorse. It seemed like an odd union, even with the initial renders. But the more one thinks about the idea of a pickup as a lifestyle vehicle, the more it makes sense. An argument can be made that the Mazda elements dilute the ruggedness that Isuzu has been known for, yet an alternate view acknowledges that some visual refinement finally comes to the D-Max, the different badge notwithstanding. 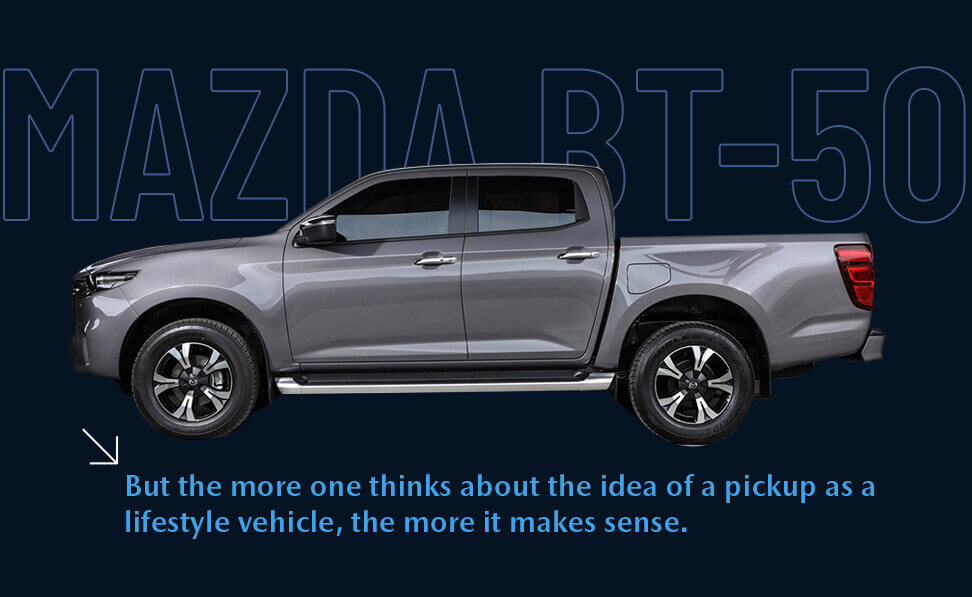 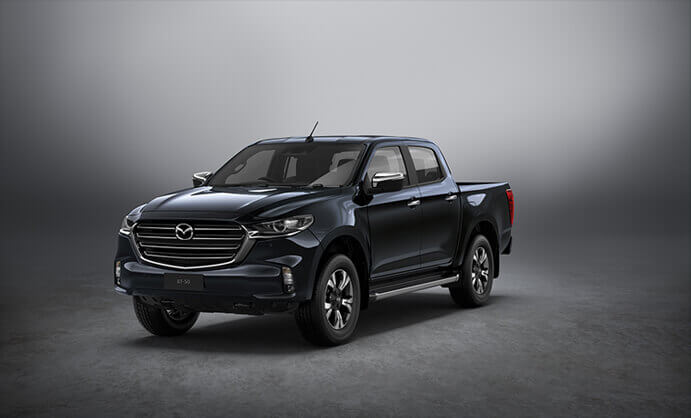 In contrast to the gaping headlamps found on the D-Max, the BT-50 deploys slimmer, swept-back projectors that surround the now-bigger grille. The body is largely similar between the two, save for the omission of the additional cladding found on the Isuzu’s wheel wells. Even the hood strakes on the BT-50 look just a little less squared-off than on the D-Max, and the roof rails are almost flush with the sheet metal, further underscoring the Mazda’s emphasis on subtlety. A range of 16- to 18-inch alloy wheels complete the look.

The new BT-50 stands 85mm shorter and 31mm lower than the outgoing model but is 20mm wider. The wheelbase has also been reduced by 95mm, but the effect on ride quality might be minimal at best (it’s a pickup after all). Make no mistake, the BT-50 is still largely an Isuzu, with Mazda tagging along for the ride. It just so happens that the latter’s contribution is more noticeable. 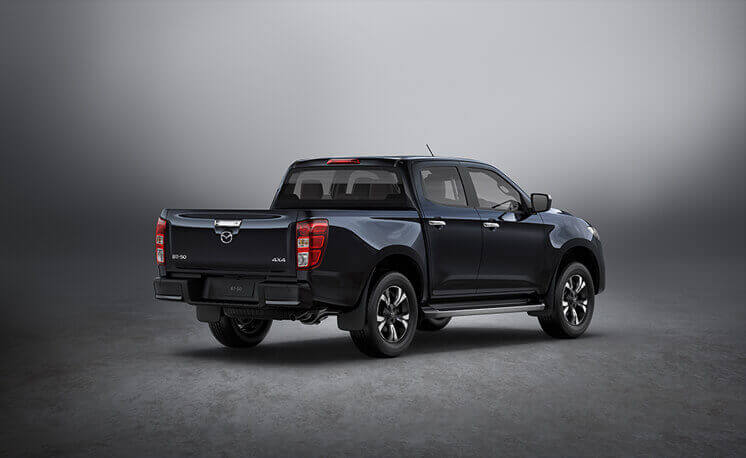 Aboard the BT-50’s cabin, a redesigned steering wheel awaits at the controls, featuring a round hub that’s more in keeping with the rest of Mazda’s model range. There’s still room for five occupants to sit on perforated leather seats, surrounded by a two-tone black and brown interior finish for a bit of variety. 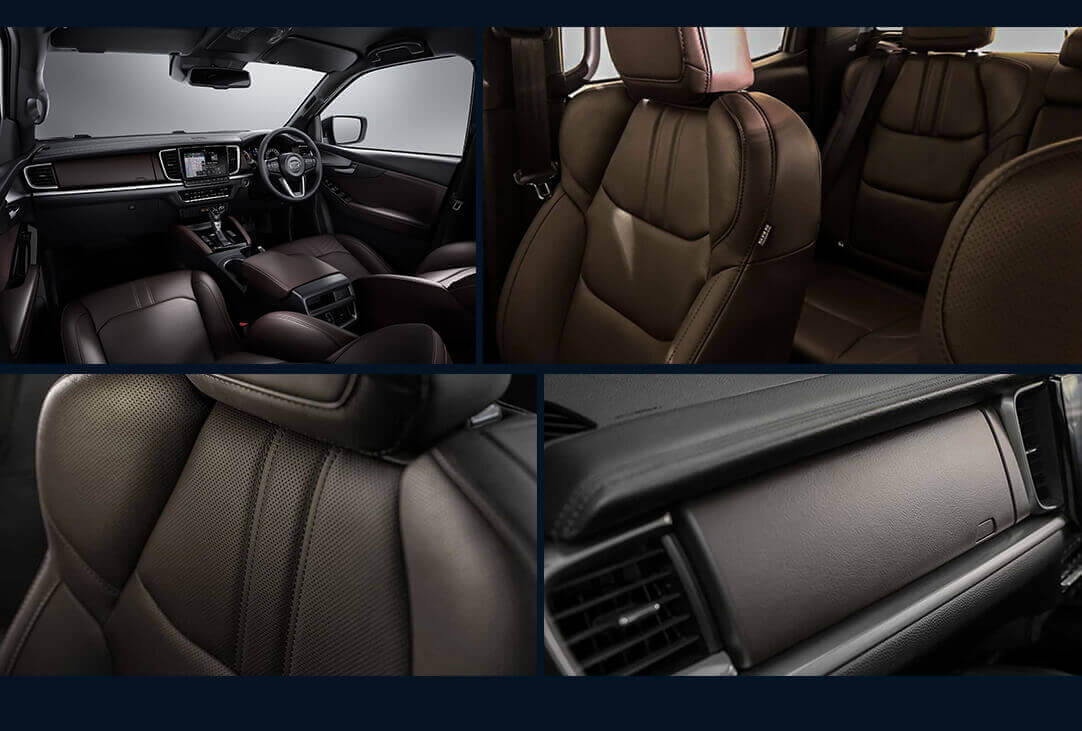 Similar to the D-Max, a row of buttons has replaced the arguably more tactile climate control knobs; it’s more streamlined from a layout perspective, but the tight spacing of the switches potentially makes accidental button presses a likely scenario. At least the touchscreen head unit has grown bigger at nine inches, offering Apple CarPlay and Android Auto. 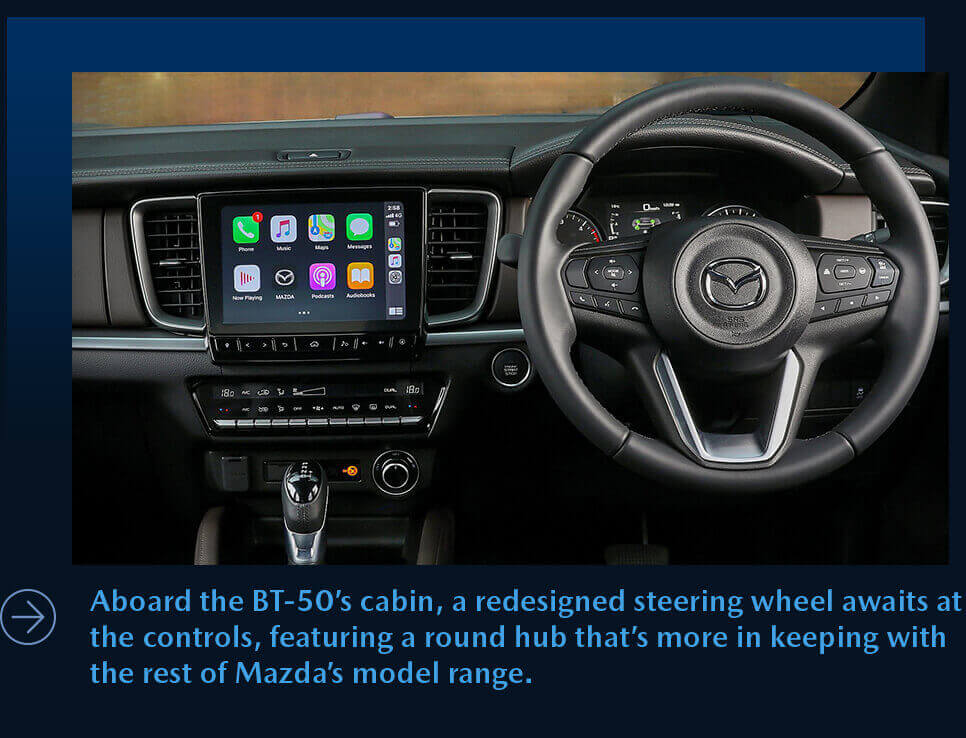 The Gen 3 Ranger-era 3.2L Duratorq has been exorcised from under the hood, but there’s no Skyactiv-D inside, despite the BT-50 being a Mazda. Instead, an Isuzu-bred 3.0L turbodiesel takes its place. The new engine makes 187 hp with 450 Nm of torque coming in as early as 1,600 rpm, working in tandem with either a manual or automatic transmission that has six forward gears each.

The BT-50 still has the same payload and towing capacity, which are still rated at more than 1,000 and 3,500 kgs., respectively. Drivetrain options include 4x2 and 4x4 versions, with the latter offering 2H, 4H, and 4L settings coupled with a rear differential lock that should dispel lingering doubts about the capability of such a well-dressed pickup. 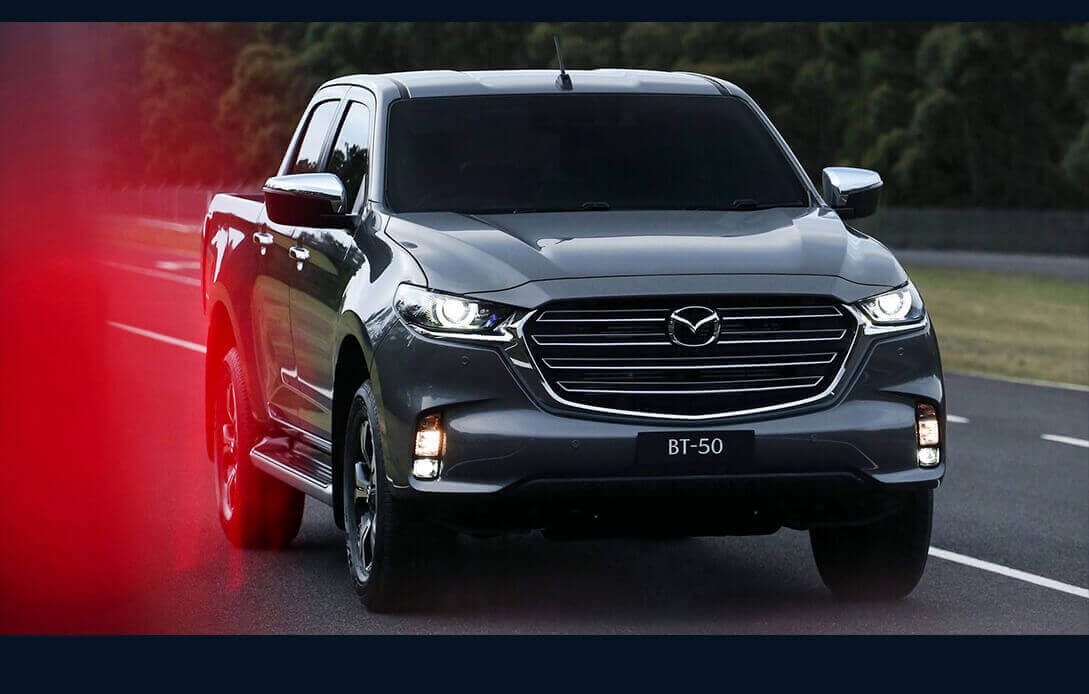 The new BT-50 (at least for the Australian market) comes standard with autonomous emergency braking, adaptive cruise control, lane-keeping assist, and blind-spot monitoring. So it’s a smarter and safer pickup than before. Stronger? It doesn’t look like it on paper, but the jury’s still out. More stylish? Absolutely, thanks to the Kodo aesthetic. But here’s the thing: even the old BT-50 was a head-turner compared to its rivals. For Mazda’s new model to gain traction in the highly-competitive pickup segment, here’s hoping that the Isuzu factor works in its favor. 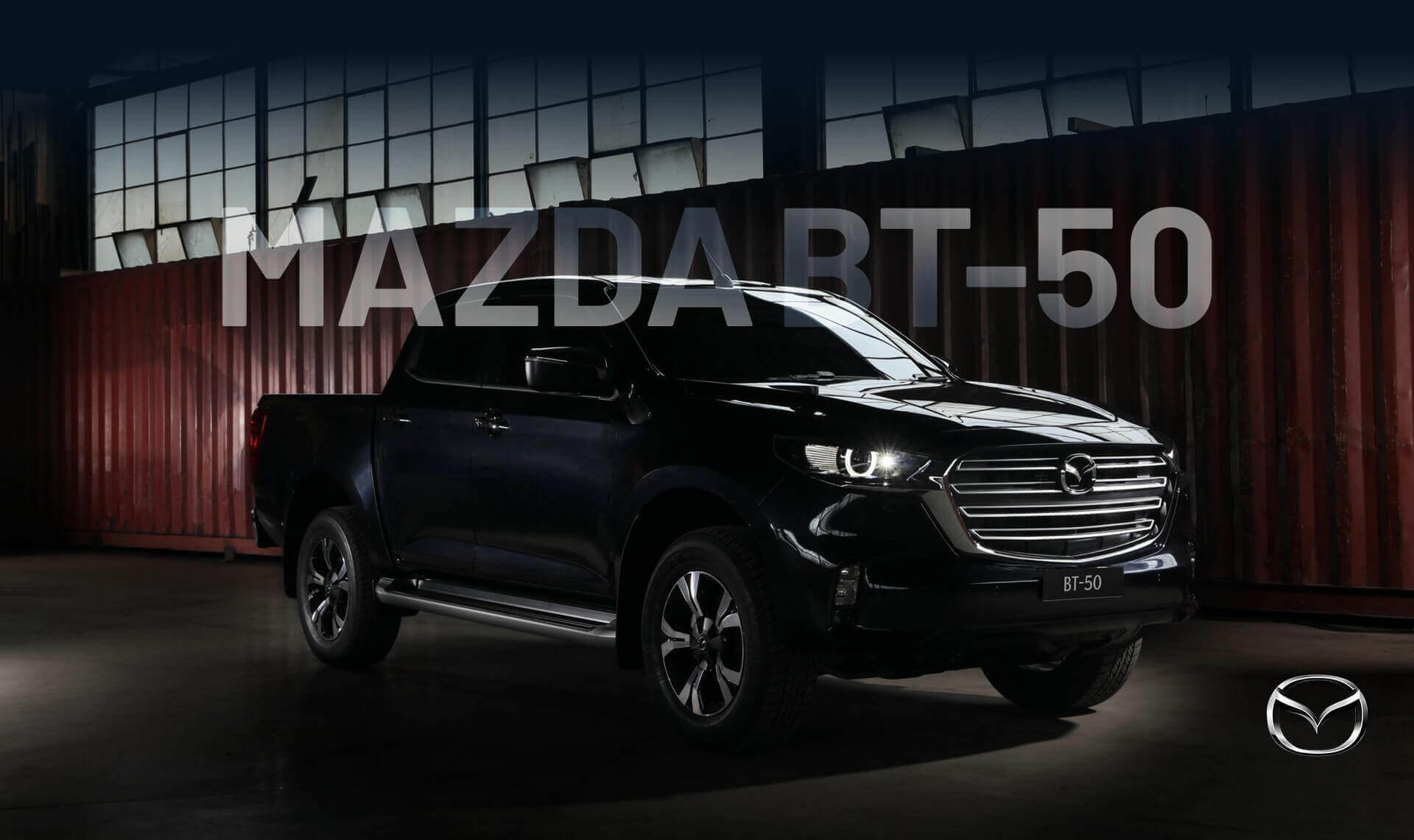