Chevrolet Division of General Motors Company or Chevrolet is a company that has been established in November 1911 and has a base office in the USA. With their vehicle’s expressive designs, good quality, and eye-catching logo, the company now has operations worldwide. I. Overview of Chevrolet

Around the globe, Chevrolet has 71 factories. Included in this number are those that completely produce the brand’s vehicles from start to finish, as well as those that do metal fabricating, assembly only, and parts manufacturers such as car seats and batteries. The factory is distributed in the USA, Japan, Mexico, France, Canada, Hungary, Brazil, South Korea, India, Vietnam, Ecuador, Egypt, Colombia, Argentina, and Thailand.

Although the company was established in 1911, the first car model produced and released to the public was in 1913, and its recognizable “bowtie” logo was designed and used in 1914 for the company’s H and L series of vehicles.

Initially, this now popular logo had no color and a few years after, the logo came in three different varieties namely a blue colored one to identify passenger cars, a gold one for trucks, and a colored (usually red) bowtie outline to represent cars that come with special performance features or packages.

Upon the popularity of other car models namely Ford and Dodge, which have an oval, blue logo and red as an identifying color, respectively, in 2014, Chevrolet decided to unify all its vehicle models with just one color, which is gold. After several years, in 2013, the Chevy logo was further improved to what it is now. The Evolution of the Chevy Logo

The importation and distribution of Chevrolet parts and cars in the Philippines were initiated by the Chevrolet Philippines – The Covenant Car Company Inc. (TCCCI) in 2009. Specifically, the Filipino-owned company was established in July while the official operation started in October of the same year. Philkotse.com will point out some noticeable success of this American car brand.

The GM award is given to dealers of Chevrolet that have recognizable sales, great aftersales, and efficient customer service. When it comes to the company’s latest market share ranking in the Philippines automotive industry as well as its sales growth, Chevrolet still belongs to the top. In 2017, as per the collected and combined data released by the reputable associations in the country namely Chamber of Automotive Manufacturers of the Philippines (CAMPI) and Association of Vehicle Importers and Distributors (AVID), the car brand is at rank number nine per market share.

2. Top-selling Chevrolet cars for sales in the Philippines

Chevrolet, in general, produces and distributes personal or passenger, SUV, truck, and commercial vehicles, and all these kinds are available in the country. However, as of writing, there are only 10 specific models that can be bought. In this post, we will focus on the top-selling Chevrolet cars for sale in the Philippines. These units, together with the other models from the company are designed with great interiors, driving assistant technology, and safety features. You can learn more about what each of the vehicles can offer by reading our detailed articles in Chevrolet cars Philippines review section.

Chevrolet has 27 fully functional Chevrolet dealerships in the Philippines, which assures that you can find the car unit of your dream wherever you are. What is more interesting is that there are other dealership centers that are on their way to serve the citizens.

Now that you have an idea where to get a Chevy car, you can start checking out the Chevrolet Philippines price list for brand-new units. From fuel-based and electrical cars to personal and commercial units, Chevrolet has it for you!

Although Chevrolet Philippines has limited models as compared to the global market, each of them has been carefully chosen to meet the needs and lifestyle of every resident interested in owning a car that can be taken to different terrains in the country. 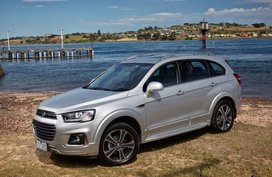 View all Chevrolet cars for sale