5 people-hauler alternatives to the Toyota Hiace

Jun 28, 2020 | Same topic: Best-Seller Alternatives
Some can even carry more passengers inside.

Who hasn’t heard of the Toyota Hiace? It has practically been a household name since 1967, going on to become a mainstay of corporate fleets, transport groups, tour operators - even hospitals.

Before SUVs were in vogue, the Toyota Hiace was a symbol of sorts for relative consumer affluence, with enough seating to accommodate a large family’s yayas on weekend beach outings or even the local inter-barangay basketball team.

The ridiculously large cargo space guarantees more than enough room for a month’s worth of groceries, and the considerable ride height gives a commanding view of the road. In many ways, it’s the vehicle that most closely represents our family-oriented culture through shared mobility.

>>> Related: A full list of second-hand Toyota Hiace at the best price 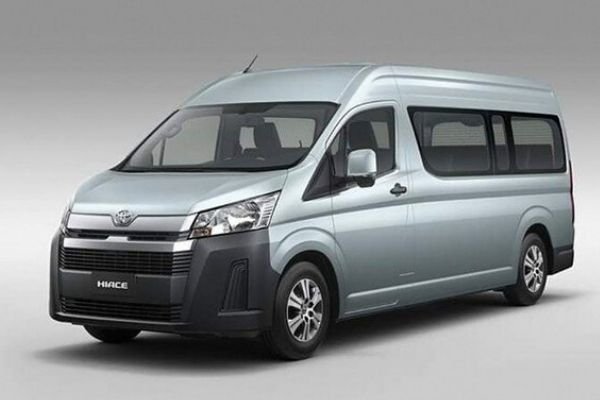 The Toyota Hiace is a household name in our market

But even with the Hiace’s cemented reputation, there are reasons why people would be tempted to look somewhere else. The rather stiff suspension on Hiace units of old might make some think twice about going for Toyota’s people-hauler.

The price might also be a consideration, with the base variant already costing as much as a more attractive-looking SUV. There are also those who might feel that the semi-bonnet look compromises lower frontal visibility compared to traditional cab-over-engine designs.

If any of these weighs on your decision to get a van either for business or personal use, here are a number of alternatives:

Another popular transport staple, the Nissan Urvan NV350 retains the cab-over design that has been common among its different generations, in order to maximize interior space and avoid higher annual taxes in Japan.

A low sill height and wide-opening doors make loading passengers and cargo easier, although the Navara stands a little narrower, which gives it a somewhat higher center of gravity. 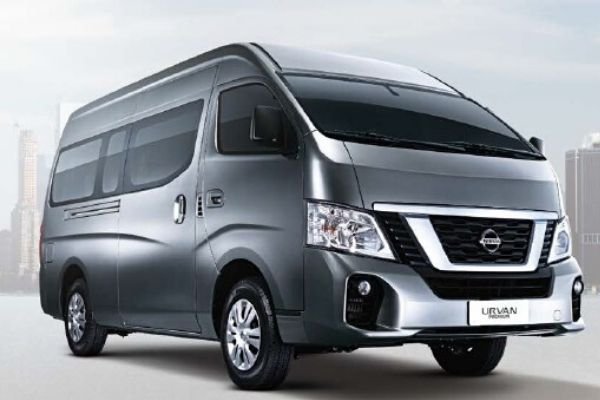 Still, more passengers will appreciate the famed Nissan air-conditioning for those lengthy summer drives (up to 18 occupants). And the 2.5L YD25DDTi diesel engine with variable turbo pumps out a healthy 127 hp and 356 Nm of torque for your hauling needs.

In terms of appearance, the Foton TransVan is heavily influenced by the fifth-generation Hiace, for better or worse. The wider body complements the TransVan’s ample 15-passenger capacity, ensuring that everyone on board isn’t squeezed tightly.

With a ground clearance of 200 mm, the TransVan is a good choice for provincial runs or simply traversing pothole-riddled roads in the city. 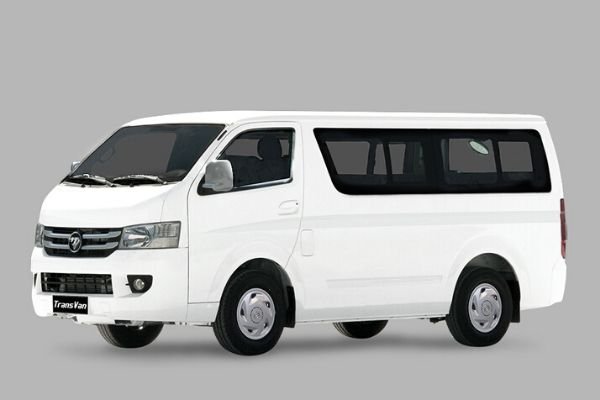 The Foton TransVan comes with 200 mm of ground clearance

The TransVan isn’t exactly built for speed (what van is, anyway), with a mere 94 hp coming from its 2.8L Cummins turbodiesel oil burner, mated to a five-speed manual transmission. But there’s 225 Nm of torque on tap, which should be adequate even under full loads.

If you find the TransVan a little too limiting for your passenger needs, there’s the more upscale Foton View Traveller, also from Foton. Apart from sporting bigger dimensions and a longer wheelbase, the View Traveller also offers more seating (up to 19 occupants on the extended XL trim). 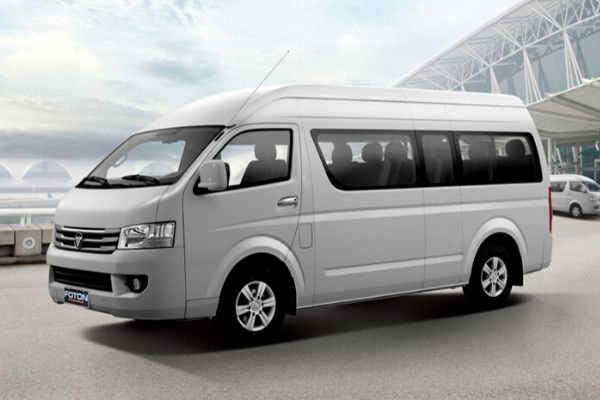 The same 2.8L common-rail turbodiesel powers the View Traveller, tweaked to generate 130 hp and 280 Nm of torque, although it does have to work with a slightly smaller 70L fuel tank compared to 75L on the TransVan. But if passenger capacity is your main criteria, the View Traveller could be a solid choice.

Like the Hiace, the Maxus V80 also sports a snub nose, placing the engine in front of the driver. The vehicle is wider than its more popular Japanese rival by up to 48 mm, which could prove handy when loading either cargo or passengers.

Speaking of which, the V80 is second only to the Foton View Traveller in terms of occupant capacity, able to seat up to 18 people. An electric step board deploys to assist everyone going in and out of the cabin, while the split-opening rear doors enable easier for maximum cargo-stacking capability. Under the V80’s hood lies a Euro 4-compliant 2.5L common-rail turbodiesel that uses Bosch high-pressure injectors, yielding 136 hp and a strong 330 Nm of torque. Safety features include anti-lock brakes with electronic brakeforce distribution as standard, along with dual airbags.

The JMC Transporter uses a more angular design especially on the nose, with a chiseled hood and grille flanked by a pair of large headlamps with LED daytime running lights. Up to 15 occupants can fit inside the large cabin, while the driver takes control of a high-definition touchscreen head unit with USB charging. 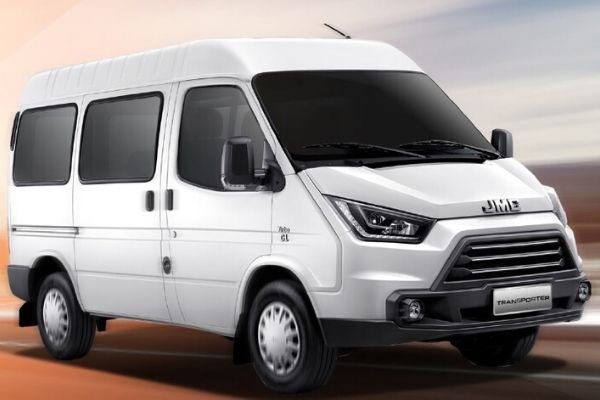 >>> Related: Find more about JMC for sale in the Philippines

The Transporter moves on a 2.8L common-rail turbodiesel that meets Euro V emissions standards, while dishing out 114 hp and 285 Nm of torque. A Getrag five-speed manual gearbox shifts the power to the rear wheels. Front airbags are among the standard safety equipment, and the Transporter comes with a three-year/80,000-km. warranty.